An anonymous donor from Arizona is offering $1 million for information leading to the recovery of the iconic ruby slippers stolen 10 years ago from the Judy Garland Museum in Grand Rapids, Minn. Worn by Garland in her role as Dorothy in the blockbuster 1939 film The Wizard of Oz, the pilfered pair was one of only four known to exist. 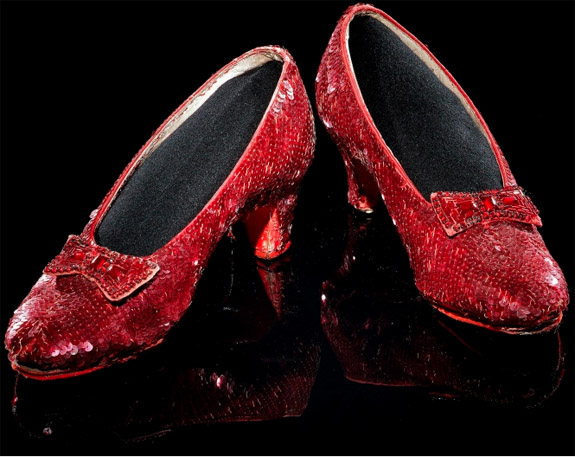 The pair, above, was famously donated to the Smithsonian National Museum of American History in 1979 and currently is the top attraction in the American Stories section (second floor east). A third pair was purchased in 2012 by Leonardo DiCaprio and other benefactors on behalf of the Academy of Motion Picture Arts and Sciences. The fourth pair is owned by a private collector in Los Angeles.

A self-proclaimed big Wizard of Oz fan, the Arizona donor made his offer to coincide with the 10th anniversary of the audacious August 2005 heist of the ruby slippers from the Judy Garland Museum. To claim the reward, the tipster needs to provide the exact location of the slippers and the name of the perpetrator.

John Kelsch, executive director of the Judy Garland Museum, said the stolen slippers were insured for $1 million and could be worth up to $3 million today.

Back in June, the stolen shoes were in the news when Grand Rapids investigators followed a rumor that the slippers had been placed in a sealed container and sunk in a small lake about seven miles from Garland's birthplace. Although the dive proved fruitless, it did spark renewed interest in the missing slippers.

Interestingly, the ruby slippers were actually silver slippers in the 1899 children’s book "The Wonderful Wizard of Oz" by L. Frank Baum. According to film legend, screenwriter Noel Langley recommended that they be changed to ruby red so they would stand out better on the yellow brick road when shot in brilliant Technicolor.

Another neat piece of trivia is that the ruby slippers are not made of ruby at all. In fact, the bugle beads that prop designers used to simulate ruby proved to be too heavy. The solution was to replace most of the bugle beads with sequins, 2,300 on each shoe. The butterfly-shaped bow on the front of each shoe features red bugle beads outlined in red glass rhinestones in silver settings.